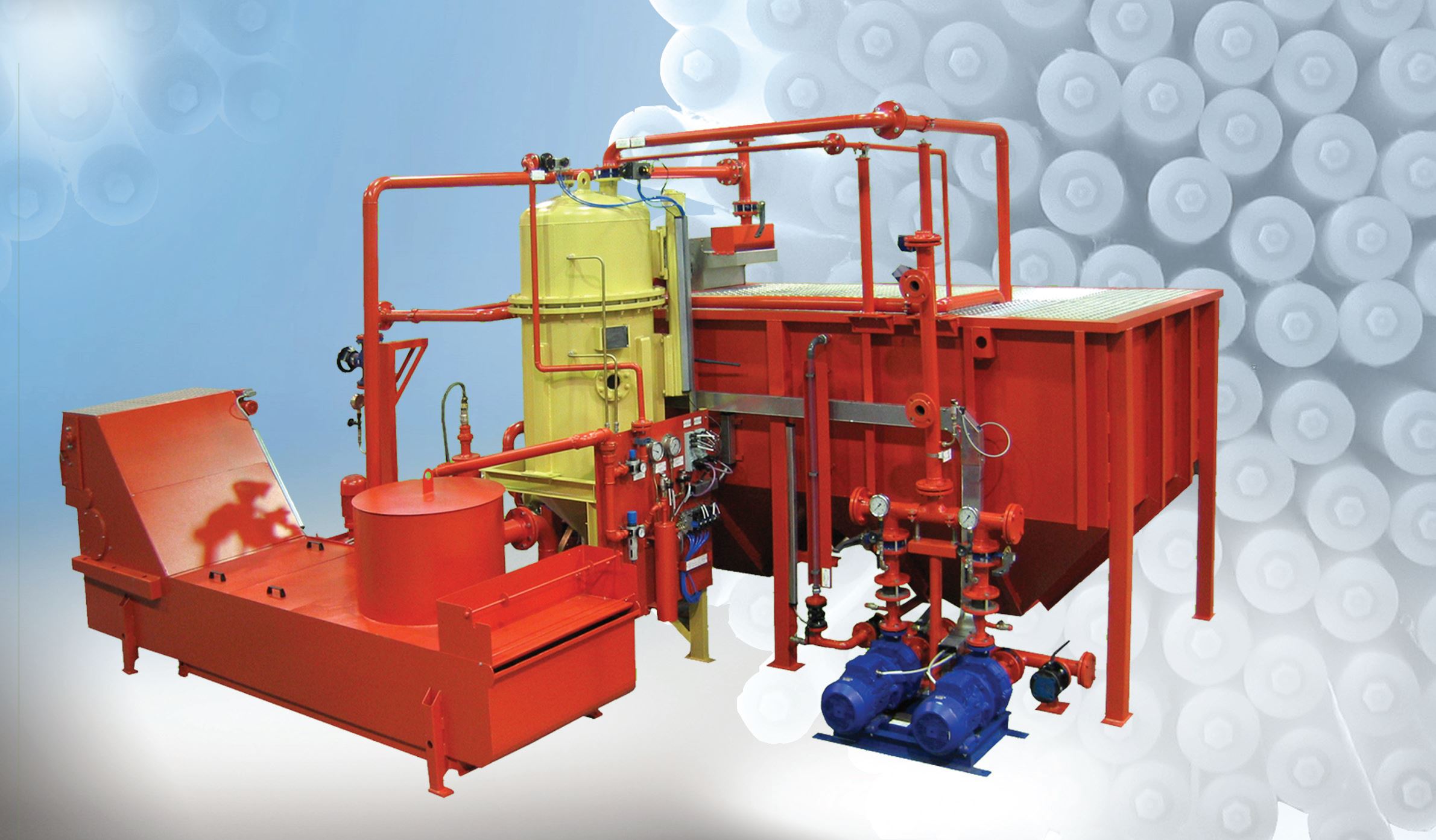 Until the introduction of the HF-filter, filtration of small particles from coolants has only been possible by depositing a thin layer of a filter aid (like oil mixed with cellulose powder or diatomaceous earth) on the surface of filter tubes to build up a coating that catches the metal particles (the so-called pre-coating).

The HF-filter has filter candles which are so fine that they retain the smaller particles directly from the coolant, offering a very stable filtration. The absence of the filter media also means there’s no need to buy the extra filter aid, which saves considerable money. In addition, as no residues of the filtering aid accumulate, disposal is more
convenient and in some cases no longer needed. After all, the waste is pure metal, which can be sold.

Firma Stevens-Hydrobelt developed a filtration concept that makes fine filtration possible without the need of any filter aid. The HF-filter has filter candles that are so significantly fine that they directly filter particles
as small as 5 micrometer from large volumes of coolant. The HF-filter finds application in filtering swarf coming from operations like grinding and honing. The filter is also used in rolling mills and as a kidney filter for coolant conditioning.

Elements of the HF-filter
A complete system to achieve fine filtration without using a filter aid consists of the actual HF-filter, a clean tank, a dirt tank and a secondary filter (generally a vacuum filter or a pressure filter). The clean and dirt tank are compactly-designed and the complete HF-system can be installed in a rather limited space. 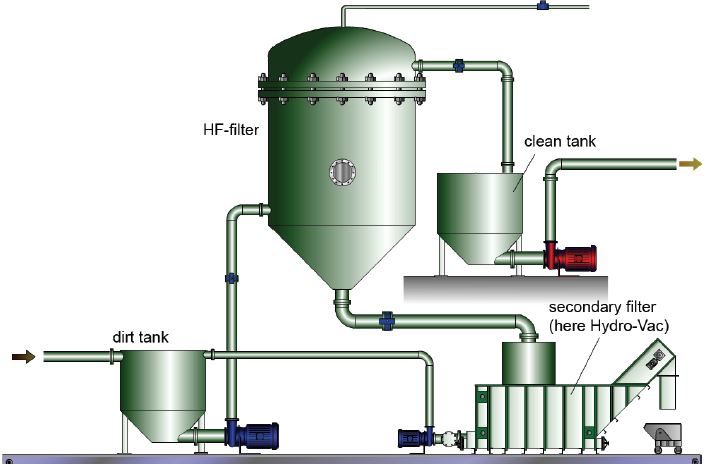 The filter tubes are mounted inside the lower compartment of a two-chambered pressure vessel. The dirty coolant flows through the tubes. The particles in the coolant are captured on and in the surface of the filter candles while the cleaned fluid flows from the lower to the upper compartment and then into a clean liquid storage tank.

As more dirt gets captured on the tubes, a filter cake is build. This layer serves as an extra filter aid. 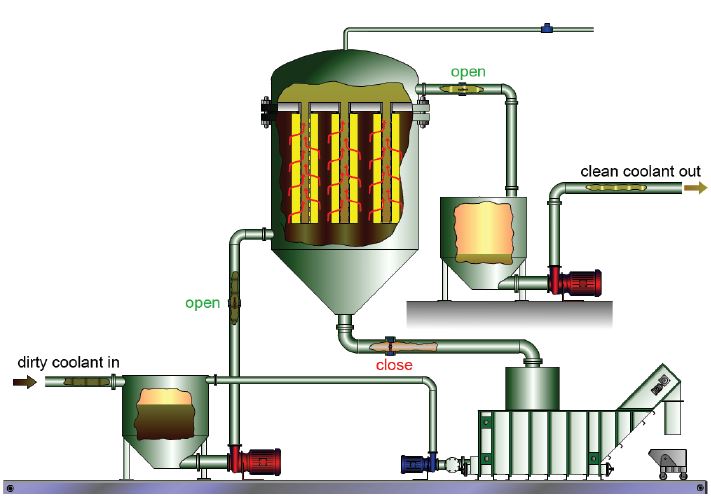 Regeneration
At a certain point though, the filter cake is saturated, which makes further filtering impossible. To guarantee a continuous flow of clean liquid, this moment has to be anticipated by cleaning the tubes. The cleaning process will start automatically since the thickening of the layer causes a pressure differential between the upper and lower compartment of the filter vessel. Besides this pressure differential, the cleaning can be automatically initiated after a pre-determined period of operating.

When the tubes are being cleaned, the filtering process has to stop for a short time. The inlet valve of the HF-the vessel closes, as well as the outlet valve to the clean tank. At the same time, the valve to the secondary filter opens. Compressed air is send through the filter tubes.

The residual dirt particles are cleared from the tubes and send to a secondary filter (generally a vacuum filter or a pressure filter). When the filter tubes are clean, the filtration process starts again. To make sure that the discharge of the dirty coolant from the machine tools and the supply of clean coolant to the very same machines is not interrupted during the cleaning process, a dirt tank besides a clean tank is used as a buffer. 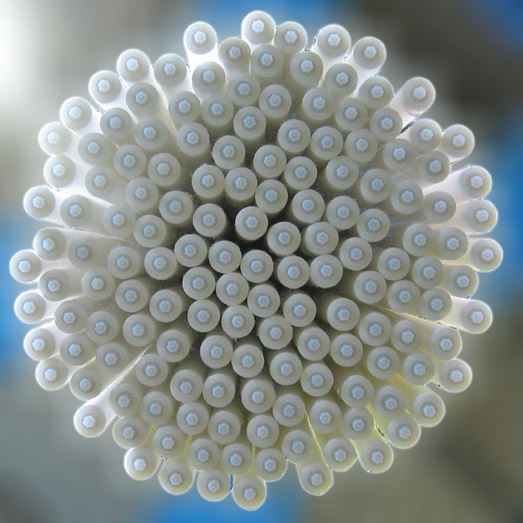 The filtertubes of the HF 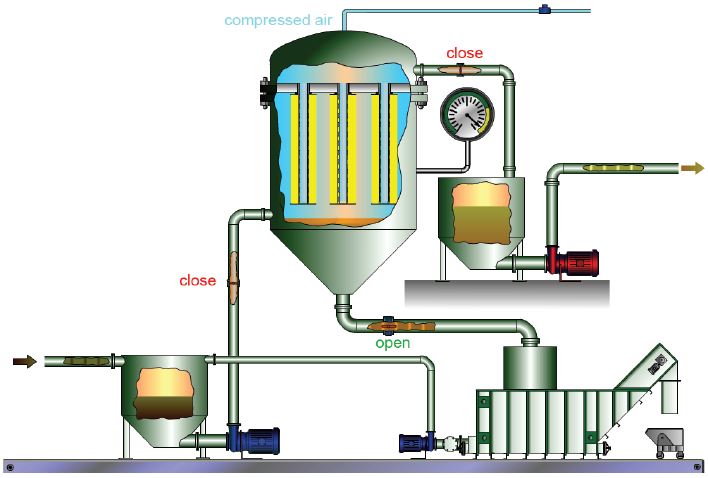